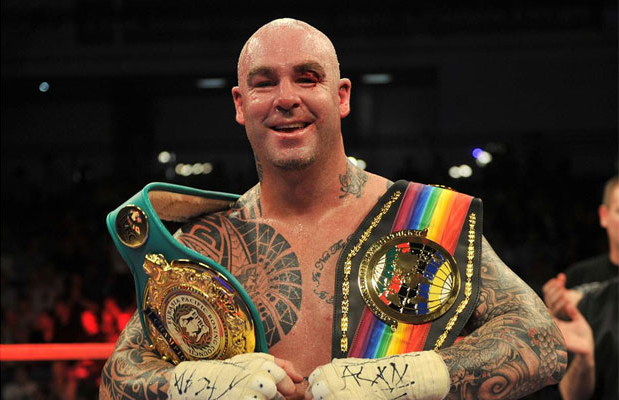 Undefeated Lucas “Big Daddy” Browne (right photo), a former bouncer and MMA fighter, is known for knocking out his opponents. Browne, from Australia, has a perfect 34-0-0 record and a staggering near 90% knockout percent.

“Browne is arguably the top one-punch heavyweight in the world since Mike Tyson. Lucas has a perfect record and the power to end a fight at any time. It will make for an explosive day of world-championship boxing,” states AWE president, Charles Herring.

Legendary world champ Ricky Hatton, is the promoter of Lucas Browne.   Hatton’s strategy for Browne is clear – a knockout finish. According to Ricky, “We don’t want the fight to go to the judges. Not that I’m saying they’ll be anything wrong with the judges the WBA chooses, it’s just that when you’re away from home you have the crowd against you and they cheer everything the fighter does, which can sway things.” Hatton added, “(Lucas needs to go) for what he does best, which is go for the knockout.”

Chagaev of Andijan, Uzbekistan was a former world amateur champion, who turned professional in 1997. The 37 year-old won his first twenty-five contests which was highlighted by a WBA Heavyweight title with a 12-round majority decision over previously undefeated champion Nikolay Valuev (46-0). He made two defenses of his title with wins over Matt Skelton (21-1) and Carl Davis Drummond (26-0) before being stopped by Wladimir Klitschko.

The start time and a full undercard will be announced shortly. Boxing fans can enjoy this amazing card on AWE available on AT&T U-Verse, ch 147 and 1147 in HD, Verizon FiOS TV, ch 169 and 669 in HD, CenturyLink PRISM TV ch. 144 and 1144 in HD, and numerous regional cable providers across the nation. Please check www.awetv.com for boxing updates.

AWE LIVE Boxing features live world title championship and elimination bouts showcasing today’s most exciting fighters. Since the inception of AWE’s live boxing events in 2011, AWE has earned multiple Boxing Writers Association of America nominations for “Fight of the Year” and has featured over thirty world class boxing events. In 2013, AWE showcased all live bouts featuring heavyweight David Price. AWE aired live the stunning upsets of Tony Thompson over David Price, along with Adonis Stevenson and Tony Bellew cards, who fought each other for the light Heavyweight championship; 2008 Olympic Gold Medal winner James DeGale. AWE brought boxing fans two of the most controversial bouts which saw Ricky Burns keep his Lightweight title against Ray Beltran. AWE fans have witnessed the explosive power of undefeated heavyweight Tyson Fury multiple times on the network, including Fury’s victory over Kevin Johnson.  In 2014, AWE televised the crowning of lightweight champion Terence Crawford with his win over Burns as well as the exciting rematches between Carl Frampton and Kiko Martinez along with Tony Bellew defeating Nathan Cleverly. In 2015, AWE brought boxing fans on of the most anticipated rematches of the year, Darleys Perez v. Anthony Crolla II for the WBA Lightweight World Title.

A Wealth of Entertainment (“AWE”) features a wide range of lifestyles and entertainment programming from exotic travel and outrageous homes to live world championship boxing. AWE is featured on over a hundred cable providers, including AT&T U-Verse, ch 147 and 1147 in HD and Verizon FiOS TV, ch 169 and 669 in HD. For more information, please visit www.awetv.com.